Hybrid golf clubs were introduced into the game in the late 1990s. They are without doubt a major step forward in golf club design. They help golfers who have difficulty finding success with the long 3 and 4-irons – the average golfer has always found these irons difficult to use.

Hybrids are easier to hit in the center of the clubface. The ball flies higher and lands softer than with your long irons, which helps place and control those important lengthy approach shots. They also are versatile, and can be hit from the rough, from bad lies.

Are Hybrids and Fairway Woods the Same Thing?

The Differences Between Woods and Irons

Woods’ club heads were originally made of wood, hence the name. Woods resemble a driver in terms of club head shape, head size, and loft and distance characteristics. Woods are designed for hitting off of short grass.

Irons’ club heads are usually made of metal. Irons are distinct in appearance from woods and drivers, having small, angled faces, usually scored with grooves. Irons are designed for hitting off of short or tall grass, and generally produce greater loft but less distance than woods.

Hybrids are a combination (“hybrid”) of woods and irons

Hybrid clubs combine the best swing and performance characteristics of woods and irons:

You can see from this chart that a hybrid will give you roughly 10 more yards distance. But how and why?

It is true to say, the lower the loft, the more difficult it is to hit the ball properly. But, hybrids and irons have roughly the same loft. So, why are hybrids easier to hit and why do they achieve more distance?

It’s in the clubhead design and trajectory.

The depth of the hybrid clubhead, from clubface to the back of the club, is clearly much more than a typical long iron and, in fact, resembles a mini-wood.

This design allows the center of gravity to be positioned much further back from the face than in a long iron. This results in a higher ball trajectory for the hybrid club compared to a long iron with the same loft. Hybrid shots will fly higher, land softer and stop quicker – good news if you’re aiming at an elevated green! Also, with hybrid clubs, the average golfer is less likely to mishit the ball.

Hybrids are easier to swing!

It is also worth noting that long irons require the golfer to strike the ball with a downward motion, compressing the ball. Whereas, the natural tendency when using a hybrid is to sweep the ball off the turf, much as you would with your driver. This swing action is likely to have much more success for the average golfer. Remember though that when using a hybrid, the ball position should be more in the center of your stance.

Here’s a useful video from Rick Shiels on the difference in swing between each style of club.

If you are confident hitting a 4-iron from the fairway with great success, then well done, you are lucky to have developed the difficult skill to achieve this shot. For the rest of us mere mortals, using a hybrid will be the answer.

You know what a hybrid is and understand the distance differences between long irons and hybrids. It’s time upgrade your clubs and upgrade your game. But what are the best hybrids? We’ve identified and reviewed the top 3 hybrids.

Don’t have time to read our reviews? Here are the top 3: 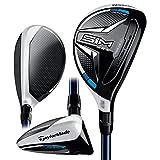 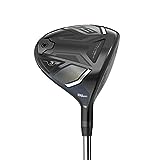 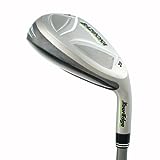 Price not available
Buy on Amazon

The TaylorMade SIM Max hybrid is designed to take your shot making to the next level. This latest model unveils an advanced face curvature with a corrective face angle for off-center hits, side spin reduction, and improved accuracy. The V Steel™ sole enables precise and consistent grass contact allowing you to hit out of just about any lie. The speed pocket sitting just behind the club face creates a huge sweet spot, driving faster ball speeds while also reducing spin.

TaylorMade remains the best manufacturer of irons and their dominance now extends to hybrids too.

The Wilson D9 Hybrids are designed to forgive mishits and increase shot distance, so they’re perfect for beginning to average golfers. The D9 Hybrids are engineered from the ground up to add distance by improving your club head and ball speed.

The Tour Edge Bazooka Platinum hybrid is a great bargain while also still delivering many of the benefits you’d expect from a hybrid. This club has been around since 2012 and has proven its worth, but its also a pretty low risk purchase that won’t break the bank. Designed to be highly forgiving, this is a great club for anyone, but highly experienced golfers won’t see big performance improvements.

From my experience, hybrids provide more consistency, more distance, better accuracy and give you more confidence when attempting those long shots towards the green. If you haven’t already done so, try a hybrid next time you play. 1. The fingers are king 2. Grip lightly 3. The Vardon grip for large hands 4. Check your …
Golf Grip, Improve Your Golf
More I’ve been getting several emails over the last few weeks about the golf handicap, “what …
Improve Your Golf
More